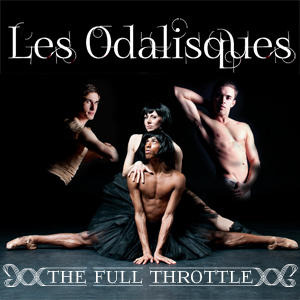 This cheeky sneak peek at LesOdalisques’ new cabaret production sashays straight to the pointe with a preview of the company’s full length show “The Full Throttle”. The Odalisques strike a pose with their gay and glamourous Inaugural Gala, a riotous romp of light hearted frivolity and hot headed hijinks both on and off the stage. Sultry starlets Tatiana Diavoletto and Bleu Phoenix simper and seethe with pent up frustration as West End Bares (*fourth assistant) director Lex Del Fierno thwarts their ambitions in his pursuit of the show-stealing newcomer, Beau Angel. Prepare to be wooed “into total submission” (London City Nights) as our boylesque ballerinas Vogue their way to a breathless finale.

LesOdalisques will tantalise the appetites and tickle the tootsies of ballet virgins and balletomanes alike, gategrashing the alter of classical ballet to worship at the feet of the great idols of the 19th and 20th Centuries (with genuflections towards ballet royalty including Petipa, Balanchine, Macmillan and Forsythe). “The Full Throttle” is currently in development for Les Odalisques’ Summer Season tour. Les Odalisques will spend a week at Underbelly as part of Edinburgh Fringe 2018. Supported by @TheatreBench and @HackBallet